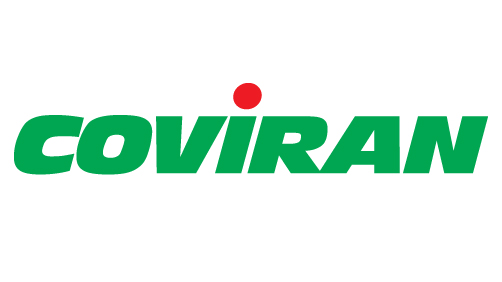 The Covirán Group is a food distribution company comprising more than 2,800 independent retail partners from this sector.. COVIRAN is currently ranked second nationwide by number of establishments, and is ranked third in Portugal. The company closed 2014 with 3,245 supermarkets distributed throughout the Iberian mainland. In 2014, the company increased its turnover 3% year-on-year, rising to 618 million euros.

COVIRÁN is designed as a services hub for its associates, offering them all the tools they require to be more competitive and to operate equally with other distribution brands, irrespective of their geographic presence.

Its extensive logistics network enables it to provide a comprehensive service to the Partner requiring an efficient, high-quality service close to its points of sale. The company currently has 24 distribution platforms in Spain and three in Portugal – one in Aveiro, to the north, another in the south in Algoz, and the third in the Lisbon district, catering to the entire Portuguese territory.

The company’s commitment to the social economy, helping to create jobs and wealth in the territories where it has a presence, its major development in recent years and the success of its expansion project in Portugal and Gibraltar, meant that in 2014 it was given the Commerce Merit Award(Placa al Mérito en el Comercio), one of the most important awards in its sector.

COVIRAN’s ongoing development is based on its national and international growth, continuous innovation in its supermarkets and superb customer service, achieved thanks to the professionalism of its partners and employees and driven through its School of Commerce.